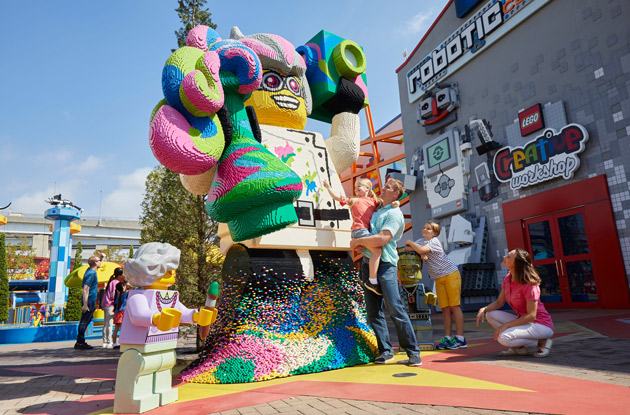 Season passes will be available for purchase later this spring. Like Legoland New York, the hotel is completely Lego-themed, and it offers four different rooms: Lego Ninjago, Pirate, Castle, and Lego Friends. All rooms will have separate sleeping areas for kids and adults, each room is equipped with Lego bricks for building, and kids can watch The Lego Movie anytime they want, 27/7, Besterman says. There’s even a scavenger hunt throughout the hotel.

For those city dwellers without cars, Coach USA is planning offer direct bus service from Port Authority to Legoland New York “to make it easier for families from this area to get to it,” Besterman says.

Legoland New York will be open seasonally (spring to fall), while Legoland Hotel will be open year-round, making it a great destination for families who want to explore the area, Besterman says.

Annual passes, which Bestermand says comes with special perks, for Legoland New York will go on sale this spring, and a grand opening date for the theme park will be announced later this year.

Things to Do with Kids in Westchester this Weekend

Enjoy these fun weekend activities with your kids in Westchester. Start planning your weekend now.